Dynatek Labs is proud to offer the M6™ Heart Valve Durability Tester, the industry benchmark for over 30 years. The benchtop M6™ is a powerful platform for replacement heart valve durability protocols that form a critical component of heart valve feasibility testing, design verification and validation.

Powerful Versatility in a Compact Unit

The M6™ can evaluate the widest range of heart valve-related devices for durability and failure mode analysis or testing to failure: 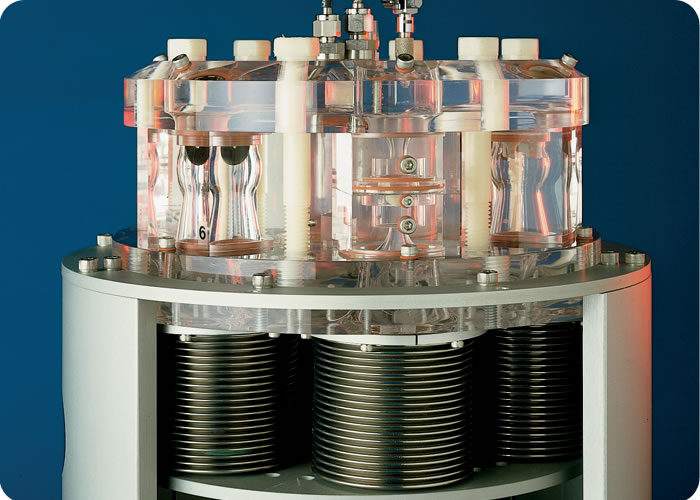 The M6™ features a clear acrylic flow chamber with six custom-designed valve test chambers that host the valve test samples. The valve test chambers are radially arranged beneath the upper flow reservoir and each is served by a single channel that directs the test fluid to the valve. The upper and lower heads, the test valve chambers and the fluid supply channels are CNC-machined from a substantial block of clear cast acrylic offering complete visibility of fluid flow and sample status at all times. Silicone O-rings ensure that the valve test chambers remain completely leak-proof.

Test Sections for the M6 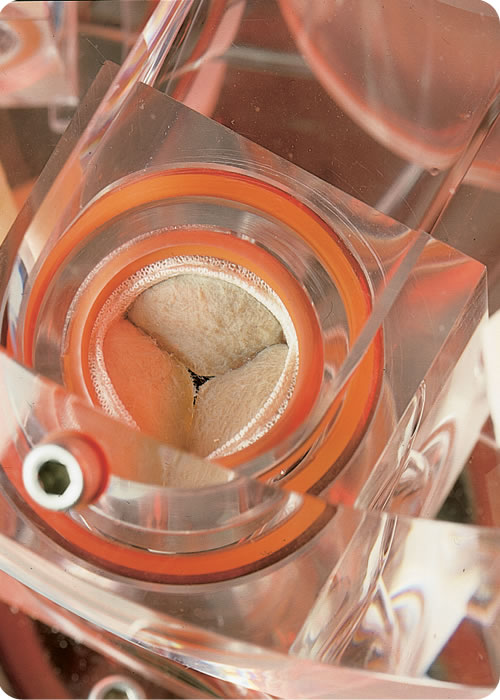 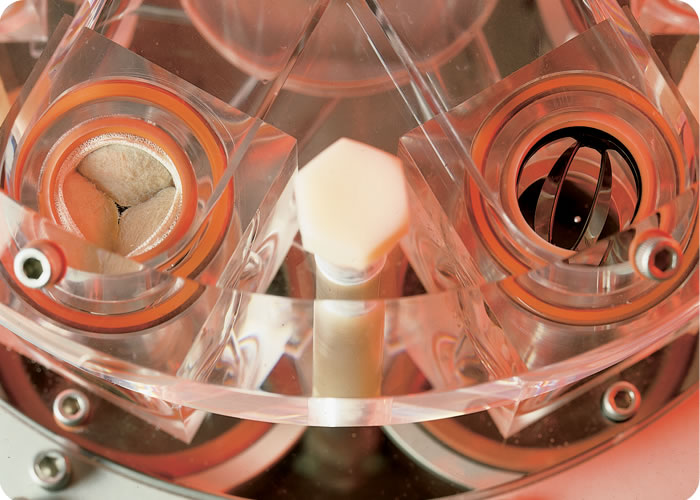 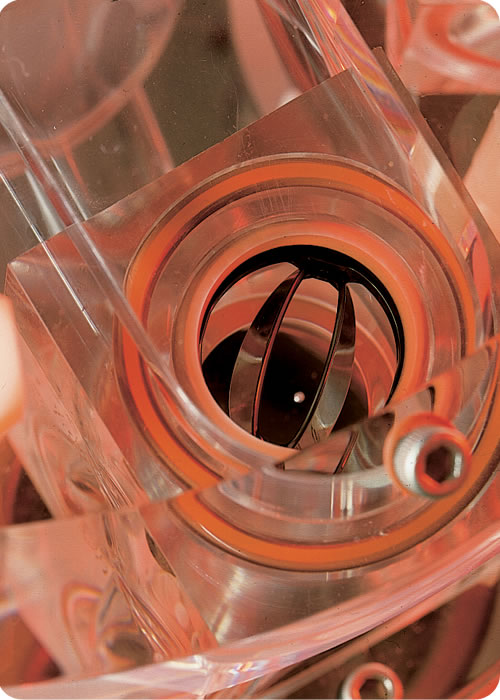 The M6’s test chambers are sequentially pressurized, which means that the failure of a heart valve in one chamber does not lead to significant pressure fluctuations in other test chambers or worse, the shutdown of the whole unit. The M6 is the only heart valve tester in the world that utilizes this principle, known as tuned fluid oscillation. This allows the heart valves to be opened and closed fully while attaining targeted closing pressures in the most biologically relevant way.

Of greater importance is the single fluid reservoir (upper head) that insures that all valves are fed identically. This is vital to insure that each valve is tested under identical fluid dynamic conditions. This is a requirement of all heart valve testing standards and cannot be attained by any “individually tuned” testers. 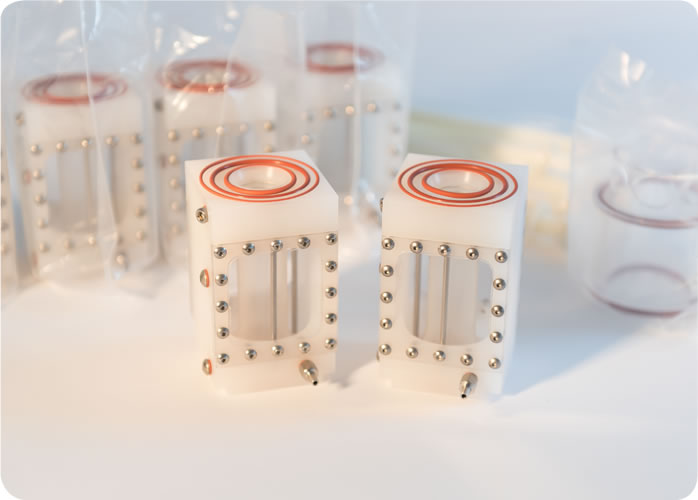 The M6 is an accelerated heart valve durability and fatigue tester and one of its advantages is the ability for the user to easily visualize and confirm the movement of the valve being tested.

ISO 5840 requires visual observation of the test valve at regular and frequent intervals such as daily or weekly. The entire upper head, lower head and all test chambers are made of clear, machined acrylic, allowing you to view both the top and sides of the test valves conveniently.

All test chambers (and therefore the test valves) are stationary in the M6, and you can conveniently use a video camera on a tripod or a stroboscope to easily follow the motion of the valve.

In competitive testers where the test chamber itself is moving up and down at high speeds, it is very difficult to visually follow the test valve’s performance with a stroboscope or a high-speed camera, preventing the user from obtaining visual data mandated by ISO.

Since the M6 does not use moving test chambers, it does not have moving parts such as sliding seals, gears, and piston arms, and its maintenance costs are negligible, compared to competitive units that have many more parts that are moving. The M6 has a swashplate that compresses the bellows under each test chamber, loading every valve in serial fashion, without the need for sliding seals and gears.

When you’re going to run a 400 million-cycle durability test, you want to make sure that you have an absolutely reliable machine like the M6 that will not break down in the middle of a test. With the M6 you just can’t go wrong, since it now comes with a 10-year limited warranty, the longest such warranty in the industry! 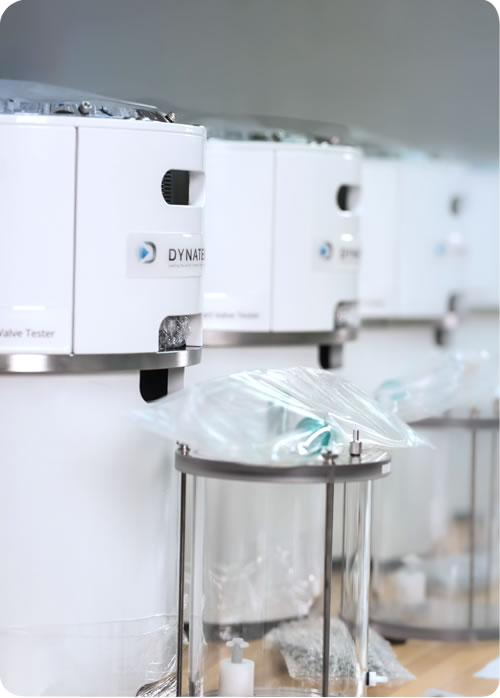 “Custom test sections can be made for mechanical, tissue, stentless and percutaneous heart valves and for testing biomaterials.” – More 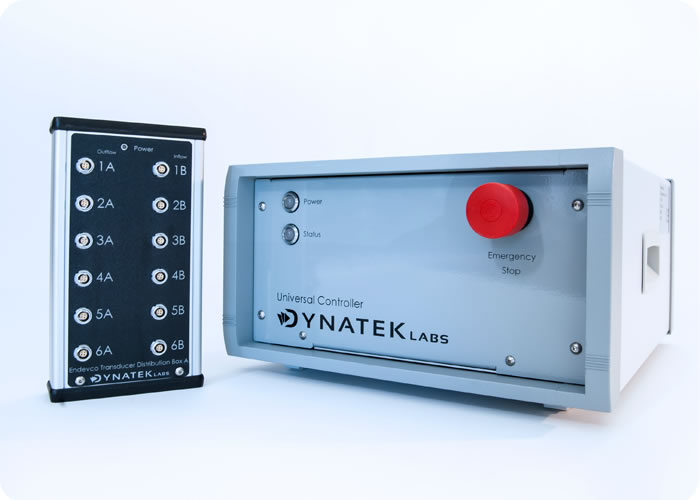 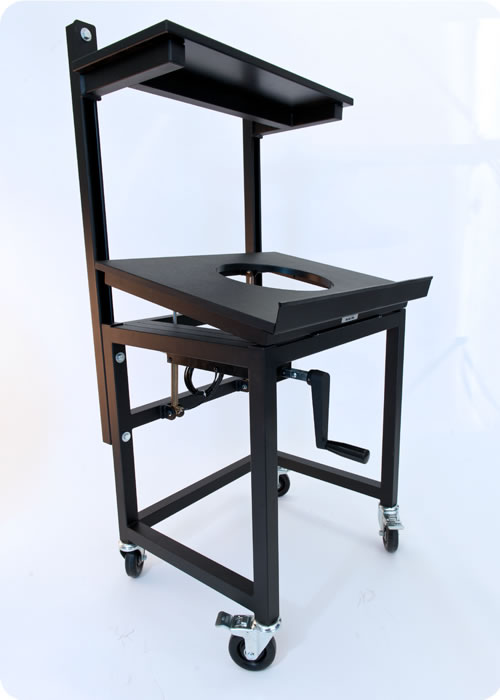 Cart for the M6 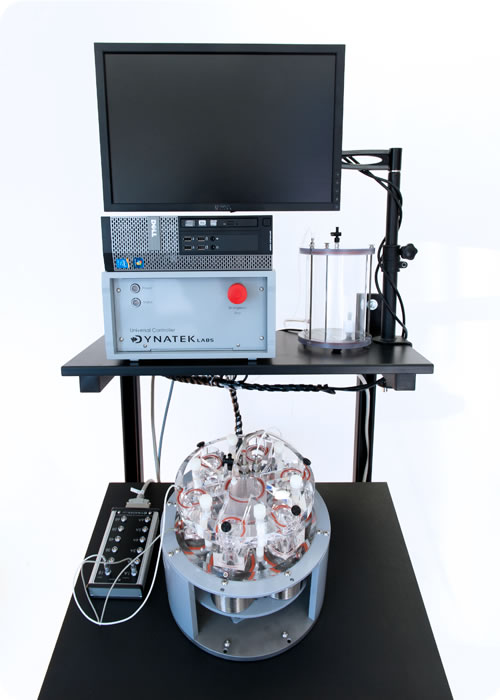 Universal Controller for the M6

Dynatek’s new Universal Controller is a powerful controller that has been redesigned to control and monitor Dynatek’s six position M6 Heart Valve Tester.

Although the monitoring and control aspects of the UC are impressive, perhaps of equal or greater importance is the time saved setting up or monitoring the “95/5” requirements for the closing pressure of each valve.

The UC can accept 12 pressure transducers, two for every position in the M6. When using all 12 transducers, each valve can be tested simply by choosing each sequentially – no need to change the position of the transducer after each valve is checked.